David Icke in Manchester Review: There is No Spoon!


Yesterday I went to the Manchester show of David Icke’s ‘World Wide Wake Up Tour’. As a teenager in 1990’s I remember vividly his interview on Wogan and the fevered tabloid press coverage that followed. Everyone from that generation will know his views on the Royal family, illuminati and lizards. Younger generations will also have been exposed to this once ‘hidden’ knowledge via his prolific YouTube output and spread of conspiricist views online. If nothing else, Icke is a strident articulator of his ideas. From a research point of view, I was interested to see who would be in the audience and how his message would be received. The event was sold out. Luckily, I’d been warned his talks go on all day so brought my sandwiches…

As you would expect there was a lot of detail. I will therefore concentrate on the main themes he covered then discuss my thoughts on the day.

Icke appeared to start slowly with views many would find acceptable, such as we spend our lives chasing dreams others tell us to aspire to rather than living in the moment. Education is a programming tool to subjugate us into working for the ‘man’ and live the life they want us to. Pink Floyd was referenced here. It stifles creativity and discourages right-hemisphere processing in the brain (linked to whole picture thinking). As a child who was into art I can dig that!

After about an hour it went up a notch and we got on to conspiracy theories. Conspiracy theories have a bad reputation. In of themselves they are not ‘bad’ or display irrational thinking, particularly if they are true! Some would argue it displays critical thinking to appraise the information you are given. There are many examples where questioning the status quo and investigating leads has led to the exposure of appalling behaviour by those in positions of power. For example, the exploitation of vulnerable children by paedophile rings. Icke has been making such claims for years and has taken credit for exposing these.

Icke’s main argument in this section was a small elite control the political and economic system. If they want to change it they create both the chaos and solution to fix it. He terms this: Problem–Reaction–Solution that creates a ‘Hunger Games Society’. This has led to a series of crises others would call standard conspiracy theories:

9/11 – Perpetrated by the US government to justify the war on terror and bring about regime change.

World War Three – Russia is not being aggressive. Stories created by Western societies to start a war and increase influence in Russia, China and Iran. If we win of course! ISIS is controlled by the world order but they don’t realise it, lol!

Banking Crisis – Make us dependent on electronic money (credit) that does not exist and take our real assets when we cannot pay the debt. The cost of homes becomes too high so have to live in small houses in condensed cities under their surveillance.

Climate Change – Not really happening. Designed to change the economic model of where we live and how we grow food. We are unable to be self-sufficient and live off the land. See Agenda 21, 2030.

Energy Crisis – Energy is freely available (Tesla) but we are not allowed to access it. Fracking is allowed by governments despite its environmental impact but other energy sources are curtailed for the same reason.

Vaccines – 74 vaccines before the age of 17! Make us susceptible to diseases we wouldn’t normally be prone to. Criminalisation of health, sanctions imposed if you don’t conform and alternative medicine is demonised or banned.

Homeopathy - Water has a memory.

News/Social media – Controlled by elites but any dissent is classed as ‘fake’ news. Tyranny of language: newspeak. Cannot say what we want to. Social justice agenda creates safe spaces that are creating a Generation Jelly where young people are not exposed to or can argue against unpalatable views.

Antisemitism – To criticise Israel is to be anti-Semitic. Argues he is not anti-Semitic, against Zionism not Jews. Despite this I noted the Star of David appeared on many slides.

Identity Politics – I AM A… define ourselves with labels. We are all one. Perception controls reality!

Part 2: Reality is an Illusion

This is where we take the red pill…

Postage stamp consensus – Our reality is based on a small percentage of what exists. Our perception has been controlled so we cannot see the whole. We are locked into our 5 senses. Infinite awareness is the true reality. Everything is conscious, we are one. Revealed in near death experiences. Mystics can see this but are labelled ‘mad’.

World is a Holographic Illusion – We only see a small frequency range in our prison of perception. Universe is a quantum computer. Oh, and the world isn’t solid BTW. Pineal gland is the third eye that just happens to be calcified by floride in water.

Paranormal – Ghosts are frequencies not sharp enough to be in focus, are interference.  Psychics tune into other frequencies of reality. Tarot cards - each picture has a frequency you are drawn to. Paranormal activity relates to electricity as it carries information. Entities are electromagnetic. Cannot impact on our frequency in other ways.

Astrology – New book coming out! Is a science. Planets are waveforms of information that affect our fields.

Conclusion - We are living in a simulation controlled by aliens. Cannot see its borders as at the speed of light time stops. If you control perception you control reality!

Part 3 was going to be on who controls the simulation but I was too tired to stay. I had already been there 6 hours! The lizards will have to wait until next time.

There were a lot of references to the work of Dr Richard Day (1969) and Bill Hicks so I suggest you check these out.

The audience itself mainly seemed to consist of the demographic age 20-40. I saw very few really young or old people and have to say they were overwhelmingly white. There was great affection for Icke and many points were met with a ripple of applause, although the more extreme views had fewer hands clapping. There was a fair amount of humour which broke up the dense subject matter. It was a long day and the couple in front of me had brought a picnic!

Despite this I really enjoyed it, particularly Part 1. This had more information (3 hours’ worth) and for me was internally consistent in a conspiracy world view. The second part was too Matrix-y for me. As a materialist I find it difficult to engage with even basic assumptions of spiritualty so this was outside my comfort zone. By the law of probability something of what he said will be true. If you cast your net wide enough you will get a ‘hit’.

Whether you accept any of his premises or not he is an engaging speaker. He came across as reasonable and happy to be ridiculed for his views. You’ll note there was no Q and A however. Unsurprising, I was unconvinced by his arguments but would recommend seeing him for the experience. If he is right you can’t say you weren’t warned… 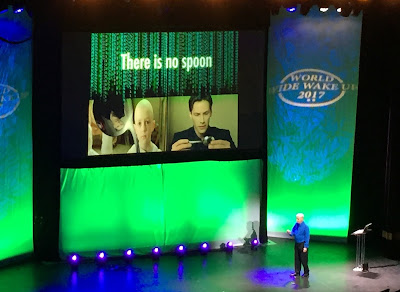 littlemissyce
Hi, I’m Claire and I kind of look like a witch. Imagine the lovechild of Fox Mulder and Dana Scully – a sceptic who wants to believe. My fascination with the paranormal started young, listening to my Mother’s ghost stories. I spent most of my childhood desperately wanting to see a ghost. I didn’t. Studying psychology has made me a sceptic but I still go ghost hunting. My MSc in Psychology (by Research) investigated the cognitive, perceptual factors and role of suggestion in Electronic Voice Phenomena (EVP). During my studies at Manchester Metropolitan University I founded the Parapsychology Society which won Best New Society in 2016. I am both a member of the Greater Manchester Skeptics Society and a paranormal research group (Ghost Tours UK). My research interests include auditory hallucinations, the psychology of paranormal belief, ghost hunting and cryptozoology. Join me on this blog for a variety of supernatural treats – ghost hunting experiences, spooky locations, (para)psychology and everything in between... Twitter: @ClaireWitchFile Facebook: The Claire Witch Files Email: clairewitchfiles@hotmail.com YouTube: littlemissyce